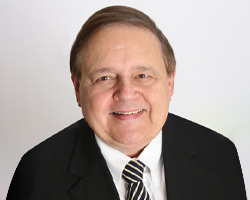 Larry Pesavento is president of Trading Tutor and a 45-year veteran trader. He managed Drexel Burnham Lambert's commodity department from 1976 to 1981. Following this, Mr. Pesavento became a floor trader at the Chicago Mercantile Exchange, trading S&P futures, T-Bills, gold, and foreign currencies until 1984, then he traded for Commodity Corporation of Princeton, New Jersey, until 1986. He has trained more than 1000 students, in the US and abroad, over the past 25 years and maintains a vast library of books on trading. As the author of 10 textbooks on trading, he describes the evolution of his discovery of the steps necessary to become a successful trader. Each year, Mr. Pesavento speaks to hundreds of traders and is a guest lecturer for many different investment programs, including radio, Internet, and universities, both in the US and the Far East. He uses a pattern recognition system of swing trading that employs swing ratio analysis along with cyclical analysis; focusing on risk control is the key to this system.

When the volatility increases most traders will go long gold and sell short the indexes. 95% are going to lose. On June 13th, 2020 join Larry Pesavento for a 30-minute webinar and learn how to survive and thrive in the coming bear market.